From Time-Out to Hard Time: Young Children in the Adult Criminal Justice System 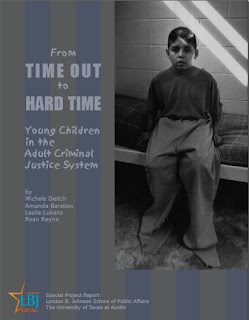 AUSTIN, Texas, July 28, 2009 – Under flawed criminal justice policy that is inconsistent with evidence-based research, trying and sentencing young children as adults occurs with alarming frequency and devastating results, according to a first-ever policy research report on the subject released today by the Lyndon B. Johnson School of Public Affairs at The University of Texas at Austin.

The report, “From Time Out to Hard Time: Young Children in the Adult Criminal Justice System,” provides a comprehensive look at how the nation treats pre-adolescent children (primarily those age 12 and under) who commit serious crimes. The report analyzes the available data with regard to the transfer of young children to adult criminal court, documents the extremely harsh and tragic consequences that follow when young children go into the adult criminal justice system, profiles practices in states with particularly severe outcomes for these young children, looks at international practices and offers policy recommendations.

The report finds that more than half the states permit children age 12 and under to be treated as adults for criminal justice purposes. In 22 states, plus the District of Columbia, children as young as 7 can be prosecuted and tried in adult court where they would be subject to harsh adult sanctions, including long prison terms, mandatory sentences and placement in adult prisons. *

Four states stand out as providing the worst possible outcomes for pre-adolescent offenders, given the combination of transfer policies and adult sentencing laws and practices in those states: Florida, Michigan, Pennsylvania and South Carolina.

Professor Michele Deitch, the report’s lead author and an attorney who teaches juvenile justice policy at the LBJ School and the UT School of Law, emphasized the national significance of the report and its findings.
“State policies allowing for the prosecution of children in adult court contradict the consensus of the most up-to-date scientific research. The adult criminal justice system is a poor and dangerous fit in every way for these young kids,” Deitch said. “Children should be handled in the juvenile justice system, where they can obtain the rehabilitative services and programs necessary to help them become productive adults. Lawmakers must reconsider and reverse these punitive laws.”

Other key findings of “From Time Out to Hard Time: Young Children in the Adult Criminal Justice System” include:

• On a single day in 2008, 7,703 children under age 18 were held in adult local jails and 3,650 in adult state prisons. In these adult facilities, the youth face vastly higher risks of physical and sexual assault and suicide than they would face in juvenile facilities. The youngest children are at particular risk.

• The United States is severely out of step with international law and practice. Most countries—including those Western nations most similar to the United States, countries in the developing world, Islamic nations, and even countries often considered to be human rights violators—repudiate the practice of trying young children as adults and giving them long sentences.

The report makes recommendations to national and state policymakers, including:

• Keep young children in the juvenile justice system. Access to the adult system must be restricted in several ways, including by raising the age for transfer, eliminating automatic-transfer laws and direct-file laws for young children, and creating reverse-transfer laws allowing criminal court judges to return children to juvenile court at any stage of processing.

• Disallow mandatory sentencing of young children in adult criminal court. Mandatory sentencing laws intended to apply to adults should be more flexible when applied to children who are transferred to adult court. Judges should have the discretion to take account of their youth and amenability to rehabilitation as mitigating circumstances.

• Always provide parole opportunities for young children transferred to the adult criminal justice system, regardless of sentence length. Children as young as 7 could receive a mandatory sentence of life without parole in Florida and Pennsylvania.

* The 22 states (plus the District of Columbia) where children as young as 7 can be treated as adults are: Alaska, Arizona, Delaware, Florida, Georgia, Hawaii, Idaho, Indiana, Maine, Maryland, Nebraska, Nevada, Oklahoma, Oregon, Pennsylvania, Rhode Island, South Carolina, South Dakota, Tennessee, Washington, West Virginia, and Wisconsin. In addition, Kansas and Vermont set the age at 10, and Colorado, Missouri, and Montana allow 12 year olds to be transferred to adult court.

Source: http://www.utexas.edu/lbj/news/story/856/
Posted by The Injustice Must End (TIME) Committee at 8:18 PM