by Diane Bukowski
The Michigan Citizen
May 30, 2009

DETROIT — Wayne County Prosecutor Kym Worthy testified, at length, opposing four Michigan House bills that would ban juvenile life without parole sentences, during the second half of hearings called by the House Judiciary Committee May 26.

Numerous prisoners’ families, and Raphael Johnson, an ex-juvenile offender, countered her testimony and that of the Oakland and Berrien County prosecutors.

The bills, as currently amended by House Judiciary Chair and sponsor State Rep. Mark Meadows (D-Lansing), would make those who were under the age of 18 when they committed a crime eligible for parole after 15 years. Previous bills have used the age of 17, which is used by the UN Convention on the Rights on the Child in barring the practice. Meadows said Michigan law automatically considers a 17-year-old an adult.

Worthy brought with her a survivor of a store robbery/murder and the son of the murdered owner, who testified that he firmly supports the death penalty. She said the family of one of the accused threatened the survivor at her college dorm.

“It’s disingenuous to say that these bills will not release prisoners,” Worthy said. “They will be released by the parole board. There is a new push to release more prisoners June 1, and what I’ve seen in the last 18 months is that the parole board has released prisoners without thought or reflection, and the prisoners have re-offended.”

Worthy gave no statistics to back up her allegations.

She also claimed that the bills would make it more difficult for prosecutors to get juveniles to take a second-degree murder plea, as opposed to fighting a first-degree murder charge at trial.

“There were 75 to 100 murders attributed to Young Boys Inc. in the 1980s,” she alleged. “They recruited juveniles to commit murders for them because they would be treated differently than adults. That will happen again. I see it in current gang activity.”

Worthy is to meet with the Judiciary Committee members to negotiate language in the bills which she claimed she could support.

Oakland County Prosecutor Jessica Cooper made similar allegations, claiming that the majority-Black city of Pontiac is a blight on “beautiful suburban Oakland County” due to gang activity.

Advocates of the bills said during both hearings that vulnerable juveniles with no other guidance are often recruited by adults to participate in crimes, but that they do not have an adult’s capacity to control their impulses. Experts testified that scientific studies show that their behavior is governed predominantly by the brain’s limbic system and the fight or flight reaction.

Raphael B. Johnson, a candidate for Detroit’s City Council, told a tale of redemption and rehabilitation that has led him to become a national spokesperson and intervenor for at-risk youth. 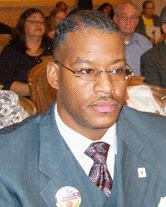 “As a teen-ager, I committed a horrible and senseless murder,” he said. “I grew up in a neighborhood known for violence and drug-dealing. My father went to prison when I was 22-months-old. I looked to the streets and tough men for role models, Despite the fact that I had a scholarship to U of D High School and was captain of the football team, I got involved in a fight after a party and shot someone not even involved in the fight.”

Robinson was sentenced to 10-to-25 years for second-degree murder and spent six of those years in solitary confinement. He was paroled after 12 years, and has been home for five. He said that sentence enabled him to “see the light at the end of the tunnel” and transform himself.

“I was still demonstrating assaultive behavior in the beginning,” he said. “But I began to change at the age of 25. I came into adulthood. I wrote letters expressing my remorse to the family of the victim and came to an understanding of my despicable crime. I read 1,300 books and wrote three. I learned self-discipline and had a strong desire to make up for the harm I had done.”

Since his release, Johnson has obtained a master’s degree from University of Detroit-Mercy. He mentors youth in the community.

But his happiest moment came, he said, when the family of his victim told him that the victim would have forgiven him, knowing all that he has done to make up for his crime.

He is a strong proponent of re-entry support for ex-offenders coming home, and testified in Washington, D.C., to support a national bill similar to the Michigan bills, called the Juvenile Justice Accountability Act, H.R. 4300.

Michael Sepic of the Berrien County Prosecutor’s office read a letter from James Tetzlaff, the brother of the store manager who was killed in a robbery where Efren Paredes, Jr. worked. Paredes was convicted of murder when he was 16. Sepic said Paredes showed no remorse at the trial, and claimed an assistant Attorney General called him a “psychopath.”

Tetzlaff also referred to the death penalty, saying, “It should be a life for a life. In Texas, that would take on a different meaning.”

“In Berrien County, all those sentenced to life without parole when they were juveniles are children of color,” said Koppenhoefer. “My son has maintained his innocence for 20 years. After work that day, he was driven home by the manager and was with us. Two of his co-defendants were older white youth who are now free. Berrien County has a long and shameful history of racism; it affects every level of the justice system.”

A friend of Edward Sanders, who was 17 when he was sentenced to life without parole in 1976, decried the changes in the juvenile bills excluding seventeen-year-olds.

“Mr. Sanders is a prime example of a Michigan prisoner who has utilized his time behind bars in a productive fashion, obtaining a bachelor’s degree and paralegal certification, and ministering to the legal and spiritual needs of other prisoners,” she said. “He will be devastated to learn that 17-year-olds have been excluded.”

An ACLU representative said that about 150 of Michigan’s 350 juvenile lifers will be eliminated because of this amendment.

Numerous other family members, both of victims and of juvenile lifers, as well as experts from the Michigan State Bar and the ACLU, who favored the bills, spoke.

Source: http://tinyurl.com/l76n9a.
Posted by The Injustice Must End (TIME) Committee at 1:13 AM