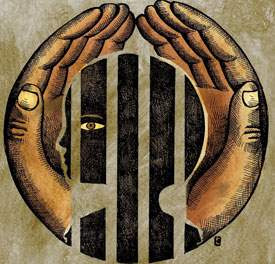 by Jeff Gerritt
The Detroit Free Press
Sunday, May 3, 2009

Michigan's notorious juvenile lifer law has drawn fire from human rights groups nationwide, and rightly so. The law has forced judges to give kids as young as 14 -- an age when they cannot legally drive or buy a pack of cigarettes -- the maximum adult penalty, with no chance of parole.

This law must change, and a package of bills sponsored by state Sen. Liz Brater, D-Ann Arbor, and others in the state Senate and House offers the best hope yet of doing that. A public hearing is set before the House Judiciary Committee on May 6.

These bills are not soft on crime. They would not, by themselves, release a single juvenile lifer. They would only give them a chance at parole after they have served 10 years, and some have already served decades.

The United States, with more than 2,000 juvenile lifers, is alone in handing down mandatory life sentences to children, according to Human Rights Watch. Nearly 350 Michigan inmates are serving such sentences for first-degree murder -- the third-highest number among states. Many were convicted for aiding and abetting the crime, and some received harsher sentences than the actual killers got. For a third, the crime was their first offense. Two-thirds of Michigan's juvenile lifers are African American.

Michigan's juvenile lifer laws were enacted during the 1980s, when many draconian measures, including three-strike laws, were approved around the country. For years, bills to repeal the laws stalled in committee. But last year, the Democratic-controlled House approved them with some bipartisan support, giving backers real hope for this legislative session.

Fueling such hopes is a general rethinking of Michigan's criminal justice and corrections policies. Michigan faces a $1.6-billion deficit next year, so politicians, including Gov. Jennifer Granholm, have moved to right-size Michigan prisons. Costing $2 billion a year, the Michigan Department of Corrections eats up 20% of the state's general fund -- more than the state spends on higher education.

But saving money is not the only issue; there are moral, legal and constitutional problems with Michigan's juvenile lifer law. It contradicts science, legal tradition, public opinion and plain common sense.

Brain-imaging research shows -- big surprise -- that teenagers are more impulsive and unstable than adults, even without the abuse and neglect that many young offenders have faced. "Sentencing a child to life without parole is cruel and unusual punishment and should be considered unconstitutional," Brater told me, after leading the fight against Michigan's juvenile lifer law for the last six years. "Given the Supreme Court's ruling on the death penalty for minors, the logical legal inference is that the principle should apply to life without parole as well."

The case of Henry Hill Jr.

Henry Hill Jr., MDOC No. 169371, grew up in Saginaw and was too young to buy a beer when he was arrested for murder. Like many juvenile lifers, Hill took part in the crime but did not do the killing. Under Michigan law, aiding and abetting a first-degree murder carries the same penalty, and prosecutors argued that Hill planned the killing with his cousin, Larnell Johnson, who was then 18.

Johnson shot Anthony Thomas repeatedly during a fight at Wickes Park in the summer of 1980 (Johnson is also doing mandatory life). But witnesses, including an off-duty sheriff's deputy, said Hill was running from the scene when Johnson killed Thomas. Before Hill left, he fired six shots with a handgun, up into the air, trying to scare people away. None of Hill's bullets matched those found in the victim's body.

Hill's maturity level was far less than even his age would suggest. In a court-ordered evaluation, a psychologist called the 16-year-old mentally deficient, insecure and unable to tell right from wrong. The report states that Hill, who dropped out in the 11th grade, had the education level of a third-grader and the mental maturity of a 9-year-old. In no way should Hill have been judged by adult standards.

"I was dumb as a box of rocks," Hill, now 45, told me at Thumb Correctional Facility in Lapeer. "I couldn't even read. I was 20 before I really realized the significance of what I had done."

Hill has served nearly 30 years in prison -- two-thirds of his life. The 16-year-old who had been labeled mentally deficient is now bright, articulate and well read. He earned a GED in prison and took college courses. He is writing a book about his life.

A psychological evaluation completed in February by the Department of Corrections called Hill cooperative, polite, articulate and straightforward. It concluded that his thinking was logical, flexible and goal-oriented.

Hill applied for a commutation in September and, after getting interviewed by the Parole Board last month, hopes for freedom.

Although he didn't kill Thomas, Hill knows he played a part and deserved to be punished. "We were all friends at one time. It was a tragedy -- just senseless. He lost his life and we could have lost ours."

Locked out of a second chance

But when is enough, enough? Keeping him locked up serves neither justice nor the taxpayer. At the very least, he and other juvenile lifers deserve a chance at freedom.

I hope Hill gets his commutation, but the governor reserves such actions for special cases only. Hundreds more like Hill will never get the same opportunity. Changing state law to make juvenile lifers eligible for parole is the best way to correct this unjust and unforgiving system.
___________________

A public hearing on second chance bills to repeal Michigan's juvenile lifer law -- HB 4518, 4594, 4595 and 4596 -- will take place on Wednesday, May 6, at 10:30 a.m. before the House Judiciary Committee at 521 House Office Building in Lansing. To voice an opinion, you can also contact your state representative or senator or Gov. Jennifer Granholm.

Contact information for state representatives can be found at house.michigan.gov. For state senators, go to senate.michigan.gov. Granholm can be contacted at http://www.michigan.gov/gov, or by calling 517-373-3400, or writing her at P.O. Box 30013, Lansing, MI 48909.

To read "Second Chances" profiles of juvenile lifers by the American Civil Liberties Union of Michigan, go to http://www.aclumich.org/resources/publications#JLWOP