"Second Chances" by Raphael B. Johnson

At 17 I was captain of my high-school football team and on my way to college. But in November 1992 I went to a birthday party with friends. We were tussling around, and the chaperones threw us out. One of them knocked me to the ground, and I felt ashamed and angry. My friend had a gun in his car. I got it, came back, and fired three shots, killing one of the chaperones. I was convicted of murder and given 10 to 25 years in prison.

I grew up in an area known for gun violence and drugs. Like a lot of boys, I looked up to tough men who could fight and had been in prison. My first arrest came when I was 12: I stole my grandmother's gun and took it to school. At 14 I was sent to a boys' home. I studied hard and won a full scholarship to attend the University of Detroit high school. I excelled there, but my thinking was twisted. I didn't know how to manage my anger. As a result, a man lost his life the night of that party.

On the day I was to begin Marygrove College, I started a prison term instead. I was 18 and had hope: I could be paroled when I was still a relatively young man. I spent six of my 12 years in prison in solitary confinement. I promised myself I would read 1,000 books. I read 1,300. I became certified as a carpenter, plumber, electrician, and paralegal.

I was released from prison in 2004 after my third parole hearing. I received bachelor's and master's degrees from University of Detroit Mercy. I started a motivational-speaking and fitness-training company. As a community-reintegration coordinator, I help other ex-offenders start anew. I'm proof that people, especially teens, can't be judged by the worst thing they ever did.

There are countless examples of former juvenile offenders like myself who, given the opportunity to be contributing members of society, have done great things. Former senator Alan Simpson committed a serious federal offense as a juvenile (destroying government property) but became a GOP leader. Terry Ray was a violent repeat offender but became an assistant U.S. attorney. Charles Dutton was convicted of manslaughter at 17 but became a respected actor and director. Dozens of studies show that overwhelming majorities of juvenile offenders mature out of committing crimes. 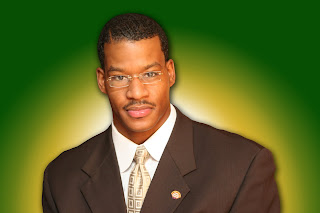 Next month the Supreme Court will hear oral arguments in Sullivan v. Florida and Graham v. Florida, two cases that will decide if it's constitutional to sentence teens to life in prison without parole. The court should give people like me a reason to keep improving themselves. Individuals who have committed crimes as teens should be allowed to have their sentences reviewed. Teenagers change. Adolescents, even more than adults, have enormous capacity for redemption. I know.

Below is Raphael's acceptance speech for being awarded Community Organizer of the Year at the 2008 Steve Harvey Hoodie Awards. The Hoodie Awards honors local business establishments, community leaders, churches and high schools nation wide for their contributions and excellence in the community. The event was held on September 20, 2008 at the Orleans Arena in Las Vegas, NV.

Posted by The Injustice Must End (TIME) Committee at 9:39 AM