Lift for Ban on Second Chances for Juvenile Prison Lifers 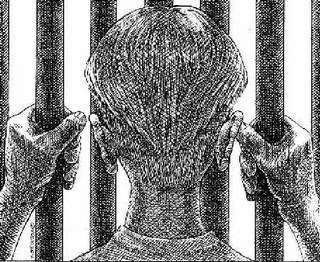 Michigan has outlawed second chances for some juveniles, garnering international shame for imposing the maximum adult penalty -- life without parole -- for children as young as 14.

The time is right to end this unreasonable and inhuman law that, in effect, declares young people beyond redemption. Michigan's budget crisis is driving a series of overdue reforms in the state's bloated prison system, including closing prisons and reducing the number of inmates by 3,500 this year. The state could release at least some of its 346 juvenile lifers, saving millions of dollars a year. As Michigan Department of Corrections Director Patricia Caruso has said, we must recognize the difference between those we fear and those we are simply mad at.

Arguments made by some Michigan prosecutors that they use the juvenile lifer law judiciously and with discretion -- even if true -- are off point. Many prosecutors, hunting for votes, have not exercised restraint or judgment. The only way to keep some of them from unnecessarily throwing away the keys on a juvenile offender is to change the law.

This issue is about a lot more than money. There are serious moral and constitutional problems with sentencing juveniles to mandatory life sentences. That's why Congress convened a hearing last week on legislation to eliminate life-without-parole sentences for juveniles, and the U.S. Supreme Court has agreed to take up two Florida cases challenging such sentences.

Michigan, too, is re-examining juvenile lifer laws that impose one-size-fits-all justice. Bills in the state House and Senate would eliminate mandatory life sentences for juveniles and restore parole eligibility to those serving such sentences.

I hope Michigan legislators have the stuff to bring juvenile laws in line with science, legal traditions and plain common sense. So far, it doesn't look good.

The House Judiciary Committee, chaired by state Rep. Mark Meadows, D-East Lansing, has already tacked on some debilitating amendments to the bills, including lowering the applicable age to 16 and under and increasing the minimum time served from 10 to 15 years. Excluding 17-year-olds, even though they are minors, would erase the possibility of parole for 129 of Michigan's 346 juvenile lifers.

The House committee might also, for the first time, require that prosecutors, judges and victims' families approve a parole hearing. If that happens, we might as well stick with what we have. Would any Michigan prosecutor running for re-election ever OK a hearing for anyone convicted of a homicide?

On the Senate side, State Sen. Wayne Kuipers, R-Holland, who heads the Judiciary Committee, would not commit even to giving the juvenile lifers bills a hearing when I talked to him last week. When corrections and criminal justice reform is dominating the public debate, no state legislator should prevent a hearing on an issue that the nation's highest court and governing body are taking on.

A chance for parole

These bills would not, as Wayne County Prosecutor Kym Worthy wrote in the Free Press last week, unleash violent criminals. In fact, they would not, by themselves, release one juvenile lifer. They would only give them a chance at parole after serving 10 or 15 years, and some have already served decades.

Michigan's Parole Board is one of America's toughest. Few juvenile offenders would get released after their first hearing. Still, offering some hope of freedom would provide a powerful incentive for prisoners to act right and change. Without hope, people become dangerous, or spiritually dead.

Moreover, to paint all juvenile lifers as crazed killers is the kind of demagoguery that made America the world's leading incarcerator. Many juvenile lifers in Michigan didn't do the killing but were convicted for aiding and abetting. The case of Henry Hill Jr., whom I profiled last month, is typical. Hill, 45, of Saginaw, was running from the scene of a fight when his cousin shot and killed an 18-year-old. At 16, Hill was sentenced to mandatory life, and he has already served nearly 30 years in prison.

Hill told me he deserved to be punished harshly for his involvement in a crime that led to murder. But, three decades later, to throw away the keys on this mature, educated and spiritual man is irrational and inhuman.

Science has proved what all parents already know: Juvenile brains are more impulsive and unstable than those of adults. They don't have the same rights as adults, nor should they suffer the same penalities. That's why a conservative U.S. Supreme Court threw out the death penalty for juveniles and now could strike down life without parole.

People, especially young people, can change and contribute to society. But hundreds of juvenile offenders in Michigan prisons won't get that chance unless legislators and Gov. Jennifer Granholm lift the state's barbaric ban on second chances.

JEFF GERRITT is a Free Press editorial writer. Contact him at gerritt@freepress.com or 313-222-6585.

Posted by The Injustice Must End (TIME) Committee at 5:26 AM